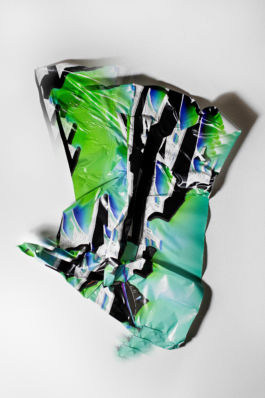 Breeze of the Endless Opportunities, 2012

Irregular patterns from imaging software printed on PVC, eventually arranged as sculptures with other objects, with the sole purpose to make work based on digitally altered images of their documentation.

εἶδος (eidos) is a noun, meaning “that which is seen”: form, image, shape, appearance, look, sight, fashion, sort, kind, species, wares, goods. From *εἴδω, a verb whose present tense is unknown, but is found only in εἶδον, the aorist principle part of ὁράω “I see”, and οἶδα “I know.”

Circulation of images—together with information and software—generates new images, different images, variations, modifications, and any hybrid form in between.

“Instead of a radiating nimbus of authenticity and authority underwritten in site specificity, we have the value of saturation, of being everywhere at once. In place of aura, there is a buzz.”

“The human eye REDUCES the perception of light; it actualizes light in a certain way (perceiving certain colors, etc.), a rose in a different way, a bat in a different way... The flow of light “in itself” is nothing actual, but, rather, the pure virtuality of infinite possibilities actualized in a multitude of ways; on the other hand, the human eye EXPANDS perception—it inscribes what it “really sees” into the intricate network of memories and anticipations (like Proust with the taste of madeleine), it can develop new perceptions.”

Retina Display is a brand name used by Apple for liquid crystal displays which they claim have a high enough pixel density that the human eye is unable to notice pixelation at a typical viewing distance. The term is used for several Apple products, including the iPhone, iPod Touch, iPad, and MacBook Pro. As the typical viewing distance would be different depending on each device’s usage, the pixels per inch claimed to be of retina quality can be different for the smallest devices (326, iPhone and iPod Touch), greater than the mid-sized devices (264, iPad) and greater than the larger devices (220, MacBook Pro). When an Apple product has retina display, each user interface widget is doubled in width and height to compensate for the smaller pixels. This mode is referred to as HiDPI mode by Apple. Apple has applied to register the term “Retina” as a trademark in regard to computers and mobile devices with the United States Patent and Trademark Office, Canadian Intellectual Property Office, and in Jamaica. On November 27, 2012 the US Patent and Trademark office approved Apple’s application and Retina® is now a registered trademark.