“THEIR FUTURE HAS FAILED” (2016) is a composition dedicated to the public domain, stored at archive.org, and free to be copied, modified, distributed and performed, as a gift to “siblings, comrades, users, peers, and lovers.”

(Predominantly) an auditive piece dealing with impermanence, impersonation, distribution prospects and perspectives, and the vehement evidence of absence—the recording discloses less as an object, and more as a stratum between worlds; a broader encompassing sedimentation of collateral excrements questioning instances of identity, participation, individual/collective desire, depression, and subjectivation.

Not bound to find an answer in itself, but to open space for further questioning, it digs into a personal archive of 9 years of unreleased media, sourcing the unrealised past as raw material for additive and subtractive rumination.

Spectre companion to “Translationships,” a long-term project initiated in 2011, which was originally bond to be the first full-length record of my other persona Death In Plains—a semi-fictional character, who operated through music in order to channel silence, “THEIR FUTURE HAS FAILED” finally ejects DIP (reborn D1000p) from the comforts of continuity and the flattery of spectacle. 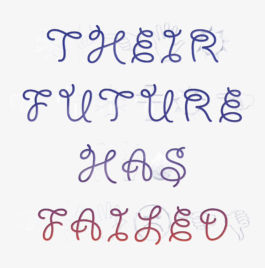